You Don't Know Me by Peter Eldridge 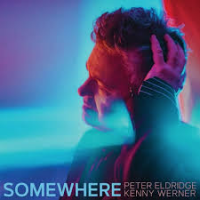 Award for most perfectly arranged swooning strings goes to...

"You Don't Know Me" is the achingly beautiful first track from Peter Eldridge and Kenny Werner's album "Somewhere," out July 5, 2019 on Rosebud Music. Eldridge wrings every ounce of heartrending emotion from the classic song, punctuated with Werner's bittersweet interjections. The realization of a long-cherished dream for both vocalist Peter Eldridge and pianist Kenny Werner, their breathtaking new album "Somewhere" marries timeless romanticism with contemporary attitudes and harmonic sophistication. Swathing Eldridge's rich baritone and Werner's keen piano mastery in lush orchestral strings, the album harkens back to swooning favorites by Frank Sinatra and Nat King Cole while offering a decidedly modern take on starry-eyed sentiment. Somewhere features classic standards and clever originals and takes its yearning title from the West Side Story classic penned by Leonard Bernstein and Stephen Sondheim Werner's sumptuous string arrangements provide the perfect complement for Eldridge's candlelit crooning, which reveals an exquisite new side to the singer's already diverse artistry. Audiences are already familiar with his vibrant harmonizing as a founding member of the revered New York Voices and the adventurous vocal quintet MOSS. The urbane wit of his own songs can be heard on several albums that smartly bridge the singer-songwriter and jazz realms; later in 2019 he'll release My Museum, a collection of previously unrecorded tunes spanning more than 20 years. When not in the studio or on the road with these wide-ranging projects, he can be found in the classroom as a member of the voice faculty at Berklee College of Music in Boston. Cellist Eugene Friesen conducts the gorgeous 20-piece string orchestra on Somewhere, its members largely culled from the gifted ranks of the Berklee World Strings. Drummer Yoron Israel, bassist Matt Aronoff and saxophonist George Garzone are also featured on the album.

You Don't Know Me; I'm So Glad You're Mine; That Which Can't Be Explained; Autumn In Three; Minds Of Their Own; Less Than Lovers; Difficult; Ballad For Trane; Somewhere/A Time For Love; Untitlted Lament; Day Is Done (Prayer For Diego).