When In Moscow by Vitaly Golovnev 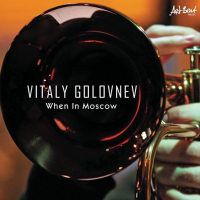 This is the third album by trumpeter Vitaly Golovnev as leader of his Russian band. Recorded in Moscow at Ton Studio 2, Mosfilm Ton Studio Complex on May 13, 2015. The album consists of eight original compositions written by members of the quartet.

Blues For My Dues; Deciding; Another Scene; Decade; When In Moscow; Tic Tac Toe; Oneness; Conversation.

track of the day When in Moscow Artbeat Music Vitaly Golovnev