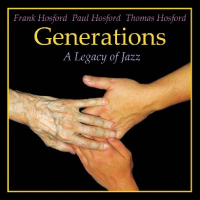 Thoughtful family interaction, not a screen in sight.

What Might Have Been is a from my latest album, Generations: A Legacy of Jazz. Generations was recorded during the final years of my father Frank's life in an attempt to capture the remainder of his unrecorded compositions. Lacking enough of his tunes to fill an entire album, I added several compositions of my own, including this one. It features my then-15-year-old-son Thomas on vibes while I play guitar, keys, string bass and percussion. As the title suggests, What Might Have Been is an introspective piece which, because of its sensitivity and depth, gave me an opportunity to teach Thomas that improvisation is about more than how many notes you play -- the notes you choose, the way you play them and the story they tell are the things that matter most...

track of the day What Might Have Been Generations: A Legacy of Jazz Self Produced Paul Hosford