Venus: The Bringer of Peace by Jeremy Levy 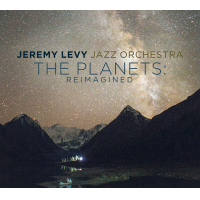 Los Angeles-based composer/arranger/orchestrator Jeremy Levy has co-led the Budman/Levy Orchestra since 2007, played lead trombone with the Brian Setzer Orchestra, and has been involved in the upper reaches of the film, TV and video game music industry for well over a decade. Looking to create an ambitious project for his own jazz orchestra, Levy was inspired to adapt Gustav Holst's symphonic masterpiece while attending a performance at the Hollywood Bowl in 2017. With its harmony straddling romantic and jazz languages while its massive scale lent inspiration for the largest of film orchestrations over the decades, the suite provided Levy with sweeping and dynamic materials to develop. In the hands of his elite colleagues from the LA studio and jazz scenes, Levy's innovative arrangements are broad, bold and swinging.

track of the day Venus: The Bringer of Peace The Planets: Reimagined OA2 Records Jeremy Levy