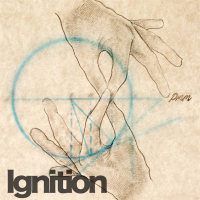 Contemplative time keeper. Hushed horns cycle with the ease of a later day Penguin Orchestra Café in a misleading intro that stop starts into something fuller, busier and packed with gritty, rock guitar cinematic tension. A fair interpretation of baby bear and big bear.

The debut studio release from UK jazz/rock six-piece Perpetual Motion Machine, "Ignition" is a concept album arranged around the theme of infinite or recurring cycles of time. Recurring throughout, the idea appears as much in Dale Harrop's beautiful Escher/DaVinci-inspired cover illustration, as it does in the field recording of the late Dorset stonemason 'Skylark' Durston reading his own poetry on the closing track, "Fog Circle". Unusually, the record is a mixture of original pieces by various band members, and group improvisations performed in the studio, under the direction of producer Sam Hobbs.