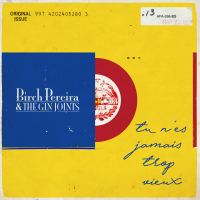 And so sang Nana Bryant so it must be true...

Last summer I was hired to play a few gigs playing instrumental French music and after immersing myself in the genre i found this melody playing around my head so I decided to record it. Around the same time, I was asked to play a gig and the hirer asked if I would make sure to not hire a band that was too old, which i found deeply offensive and inspired the name of this song

About Birch Pereira & the Gin Joints