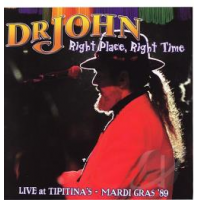 Musically speaking, there are few events as highly anticipated as the venerable Mac Rebennack, aka, Dr. John, performing "live" in New Orleans. Perhaps the greatest living musician from the Crescent City, the Doctor's hometown appearances always prove to be a full- scale celebration of New Orleans culture and people. Add Mardi Gras night at Tipitina's into the mix and the stage is set for an intangible X-factor to enter the musical equation. Proof of that resounds in the forthcoming, Right Place, Right Time - Live At Tipitina's Mardi Gras '89, a single-disc set capturing the one and only New Orleans Night Tripper, Dr. John, on Mardi Gras night 1989 at the hallowed Big Easy music venue, Tipitina's. Right Place, Right Time is Volume Two of "The Rebennack Chronicles" on Dr. John's Skinji Brim imprint distributed through Hyena Records and produced by Joel Dorn.