This Heart of Mine by Johnny Boyd 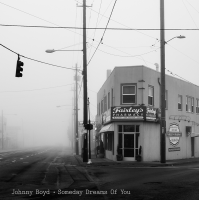 Maybe it was reflux? While there are many dreaming of gay amour, there are still a few that aren't. A rendition that captures the distillate of a thousand musicals.

"This Heart of Mine" is a much-treasured American Songbook standard from 1946 – it was featured in the film "Ziegfeld Follies," and introduced by Fred Astaire. Johnny Boyds's take on it is a super-modern, intimate waltz. Boyd has been heralded as romantic, smooth, sophisticated and fun.” No one exemplifies modern-day crooning better than Johnny Boyd: smooth, romantic vocals; matinee idol charisma; classic gentleman’s style; and dynamic, irreverent performances. But it’s his fresh, emotive, all-original contributions to the Great American Songbook that will be his legacy. With his album, "Someday Dreams of You," Boyd introduces a whole new generation of listeners to the Great American Songbook and his classic crooning style.