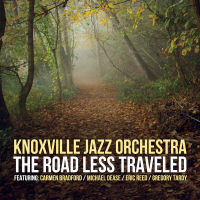 A whole organism display of organised order and chaos, with dazzling restraint and release. Unified brass and horns never disappoint.

Rhythm-A-Ning; Grew's Tune; What The World Needs Now; The Peacocks; Tumbling Tumbleweeds; The Road Less Traveled; Back Down In Lu Easy Anna; The Tennessee Waltz; Woody'N You; Monk's Mood; Ask Me Now; At Last