The Ocean by Yuto Kanazawa 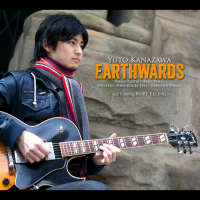 An enchanting tune inspired by Fukushima, goes well with a spot of http://en.wikipedia.org/wiki/L'infinito Out of chaos comes order.

7th track of the album "Earthwards" featuring Felix Peikli on clarinet, Zwelakhe-Duma Bell le Pere on bass, Jonathan Pinson on drums. From album booklet: "The melody for “The Ocean” comes from a deeply emotional part of me, as it was composed directly following the tragic Japanese earthquake and tsunami of March 11th, 2011. At the time I was living in Boston. It is hard to convey the sense of helplessness I felt while seeing such events unfold from afar. I was able to express a few of my overwhelming feelings in this composition, which I debuted at a tsunami benefit concert held at the All Asia Bar in Cambridge, Massachusetts. My band featured Hiro Honshuku on flute that evening. In spite of such a catastrophic situation, it was good to see the community come together. My hometown is in Fukushima Prefecture, one of the regions most affected by this disaster. In Japan, we have a distinct relationship with the ocean and view it as the source of life itself. We also have a challenging history with nuclear energy - I myself was born in 1986, the year of the Chernobyl incident. When composing “The Ocean”, I tried to paint a beautiful picture of the sea, seen through the lens of impermanence. The majority of our Earth’s surface is ocean - powerful, dangerous, vast, and beautiful. It is a vital part of Earthwards."