The Lost Lenore by Joe Locke 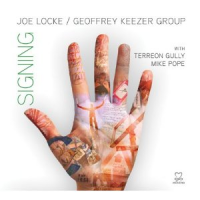 Locke and Keezer have an enviable symbiosis in performance, and their new album is further evidence of it. This particular track comes with plenty of bright notes, but accompanied with a corresponding sense of melancholia. Light and dark, serenity and tension... contradictions that Locke & Keezer have a talent for meshing.

With the release of the Joe Locke /Geoffrey Keezer group’s Signing, the much in-demand follow-up to its debut, Live in Seattle (Earshot Awards' "Best live performance of 2006"), Locke's career is set to kick into yet a higher gear. The award-winning artist has teamed up with Motema Music, a strategic collaboration in the coming year-and-a-half to release a series of three Locke projects, each designed to demonstrate a different facet of his unerring lyricism, unfettered imagination, and show-stopping virtuosity. Personnel: Joe Locke (vibes), Geoffrey Keezer (piano), Mike Pope (bass), and Terreon Gully (drums).

Locke's "The Lost Lenore," was first heard on Storms/Nocturne Trio's self-titled 2001 Sirocco Records debut, but is reworked here with deeper groove and a different kind of lyricism. Signing reprises the deep chemistry, inimitable virtuosity and underlying lyricism that made Live in Seattle such a breath of fresh air. With virtually no rehearsal and nearly every track a first take, there's an energy, excitement and persistent sense of discovery not unlike Live in Seattle, despite Signing being a studio recording.