The Indispensable Warlords by Martin Kuchen 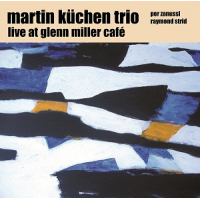 Recorded in April of 2006 at a Stockholm jazz club, Live at Glen Miller Cafe is forward-looking while connected to the Free Jazz tradition. The fervent music on the recording reassembles and reconstitutes in a novel fashion the near-atonal group advances of older saxophonists such as Albert Ayler, Peter Brötzmann and Ornette Coleman. As importantly, the performances are never strident or unpalatable.

Listen to this disc as a rough-hewn essay in advanced, contemporary Scandinavian improvisation created on the spot by some of its most profound practitioners. Memorable musical tricks may be on show, but they share space with talent and inspiration." From Ken Waxman's liner notes.