The End by Michaela Rabitsch 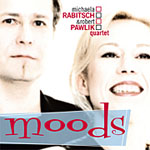 The CD was recorded and mixed in our own studio in Vienna/Austria. The recording took place in two sessions - one in summer 2006 and the other in May 2007.

track of the day The End Moods Extraplatte Michaela Rabitsch