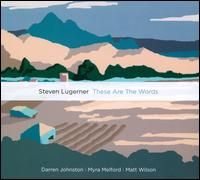 Album Title: These Are The Words
Label: Self Produced
Released: 0

I've been comparing this album favorably to Brian Blade's Season of Changes. Some challenging dissonance which neverbstrays into inaccessible territories. Myra Melford's presence on the album is palpable from the get-go, so if you like her work on other projects, this will float your boat, too.

Steven Lugerner- Saxophones, Clarinets, Double Reeds, Flute; Darren Johnston- Trumpet, Flugelhorn; Myra Melford - Piano; Matt Wilson- Drums. The music written for These Are The Words contains one composition for each book of the Hebrew Bible. The first five tracks should ideally be listened to as a work unto itself, similar to a symphonic suite.