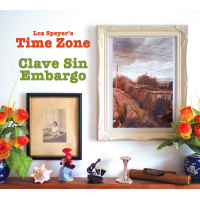 Stratosphere is the first track on the album "Clave Sin Embargo" by London based 6-piece Loz Speyer's Time Zone - a ‘deep fusion’ of Cuban music and Jazz, that was born more than 15 years ago when UK trumpeter Loz Speyer was living between London and Santiago de Cuba, studying and performing there with local musicians, delving into the roots of Cuban music - and starting an Anglo-Cuban family. Loz writes: "Stratosphere is essentially one harmonic idea played out on three levels - the first, close to the ground, a classic type of Latin tune with a 12-beat clave - the second, rhythms starting to shift and open up - the third, taking flight on a swing-related fast 5/8. My friend Dagoberto once said of a Time Zone recording that it had the sound and feel of Cuban music - but of the air above Cuba, so easily able to fly elsewhere - in contrast to home-grown Cuban music which is rooted in the soil. My friend is a Latin scholar and had held a teaching post at Universidad del Oriente, Santiago de Cuba. Like many Cubans, he has never had the opportunity to travel."