Songs of the Decades by Rebekah Victoria 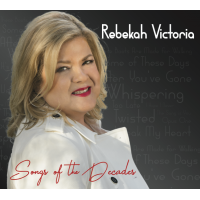 "Some of These Days" is the first track from jazz vocalist Rebekah Victoria's extraordinary album "Songs of the Decades." As a jazz singer, Victoria’s performance repertoire tends to come overwhelmingly from the era of the Great American Songbook: the 1920s, ‘30s and ‘40s. As she was preparing to record her second album, however, Victoria was inspired to widen her musical perspective in terms of both time periods and popular styles. Songs of the Decades is her investigation of the music from each decade of the twentieth century, The album features Victoria and a group of two-dozen musicians including the Grammy-nominated trombonist, composer-arranger and bandleader Wayne Wallace, who acted as Victoria's partner for the album. He co-produced it, wrote all of its arrangements-often incorporating elements of Latin jazz, his specialty-and assembled its superlative cast of 24 musicians, including improvising vocalist Kenny Washington, Wallace's bandmates from his own various projects, and a string quintet that features members of the San Francisco Symphony.

Some of These Days; Whispering/Groovin' High; After You've Gone; Twisted; Un-break My Heart; These Boots Are Made For Walking; It's Too Late; The Song is You; Opus One/Undecided; I Hope I Never