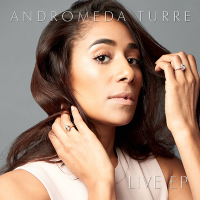 With such a powerful voice and excellent jazz pedigree, Andromeda's star is set to rise. Her take on an indie favorite.