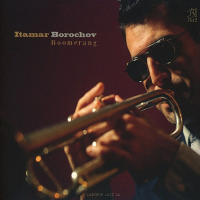 Love those Mujechri's - best of all worlds, masters of one. Investigate, Gestate, Elate. #viaconshimshon

Itamar Borochov brings a unique sound with him wherever he goes. Deeply immersed in the jazz tradition, Borochovʼs search for his personal roots resulted in an ever-expanding love for Arab and Pan African musical sensibilities – a natural palette for a trumpeter-composer raised in Jaffa, an integrated Muslim-Jewish-Christian city. After working with such legendary artists as Curtis Fuller and Candido Camero, and having served as arranger and co-producer for acclaimed world music sensation Yemen Blues, Borochov set out on his own path. His critically acclaimed recording Outset was included in the New York City Jazz Record’s Best of 2014 List, and his latest album Boomerang, has already received serious critical acclaim, and peaked at #5 on iTunes’ Jazz Download chart, and #6 on Amazon’s Jazz Download Chart, and was chosen as “revelation" on Jazz Magazine. Audiences worldwide are falling for his enchanting sound and virtuosic expression. Borochov has performed internationally at such prestigious venues and festivals as Lincoln Center (NY), The Kennedy Center, (Washington DC), Montreal Jazz Festival, and the Moscow Jazz Festival, to name just a few. Boomerang, was completed in Paris in December 2015, mixed in New York by award-winning engineer Brian Montgomery (Paul McCartney, Esperanza Spaulding, Donald Fagen, Herbie Hancock), and is his label debut for acclaimed French label Laborie Jazz. Boomerang features his extraordinarily quartet of pianist Michael King, bassist Avri Borochov, and drummer Jay Sawyer. The four have toured widely and frequently, resulting in a telepathic cohesiveness and devotion, and many inspired performances the world over. Guesting on the record, on jumbush and vocals, is Itamar’s father, and acclaimed Israeli composer, Yisrael Borochov. Itamar Borochov, quickly gaining international recognition as a jazz innovator, continues his musical quest, offering on Boomerang a music that reflects a rich global landscape seen firsthand, through the jazz tradition. “Borochov is extending the jazz tradition out of the resources of the tradition itself. Around the turn of the 20th century, Jelly Roll Morton was talking about the "Latin tinge," and in the late 40's Dizzy Gillespie joined forces with Chano Pozo to make the Afro-Cuban classic, "Manteca." In the 1960's Horace Silver got in touch with his Cape Verdean roots in "Song for My Father," and so on. As Borochov notes, "Bebop was the highest of musical art forms, the first 'world music' ─ integrated, tribal, sophisticated, and down home soulful. What I'm doing now, bringing my sound to the jazz idiom isn't so different from what Dizzy did. I'm progressing by reconnecting to the roots and taking it to the now and to the future.” – Boomerang by Dr. Aryeh Tepper.