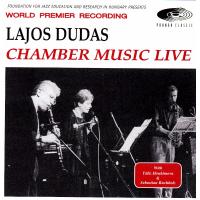 This will appeal to the thronging operatic masses. The instrumental is acquiescent and calming. The exception is the vocal "na-nas," which is sadly too much for one in this context.