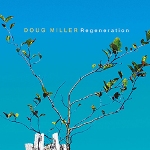 Seattle bassist Doug Miller puts together a wide-ranging program of originals highlighting the multi-dimensional and multi-instrumental talents of his trio with saxophonist/trumpeter Jay Thomas and guitarist/pianist Dave Peterson. Joined on several tunes by drummer Phil Parisot, the disparate elements are held together with a solid compositional vision and the deep musical connection between his longtime bandmates. Originally from Indiana, Miller spent several years in New York City working with Mel Lewis, Scott Hamilton and Doc Cheatam. He's performed with some of the worlds greatest jazz players including James Moody, The Clayton-Hamilton Orchestra, George Cables, The Count Basie Orchestra and Dick Hyman. He has toured internationally with the Ellington Band and with Ernestine Anderson.