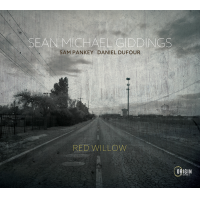 Austin-based pianist, composer, singer and producer Sean Michael Giddings has had a wide-ranging career since moving through the University of North Texas 1:00 Lab Band a decade ago. Tours with pop icon Christopher Cross, country star Pat Green, or virtuoso guitarist Eric Johnson offer a deep musical well to draw from when expressing his own songwriting voice or with this, his debut piano trio album. His compositions and musical touch evoke major influences such as Vince Guaraldi, Bill Evans, Keith Jarrett and Brad Mehldau, while the central Texas setting of his home recording studio—with the Baldwin baby grand that’s been with him since childhood—add a patient, comfortable embrace to the session. With the calypso-esque “Sebastian,” or the ‘70s Jarrett-influenced “First Cup,” Giddings’s longtime collaborators bassist Sam Pankey and drummer Daniel Dufour propel and support, while the moving ballad, “In the Light of the Unfinished Moon,” personifies the sound of deep musical connection.