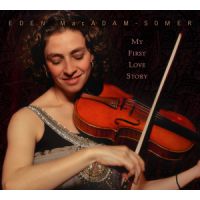 "My First Love Story" introduces the solo work of one of New England Conservatory’s newest faculty members and one of the most dynamic young artists performing today: composer, performer, and improviser Eden MacAdam-Somer. Recorded live in NEC’s Jordan Hall, this album is an incredible blend of contemporary and traditional art, moving fluidly between Appalachian folk song, improvised music and cutting edge classical performance. "Rumi Songs: Transformed” is a track from MacAdam-Somer's new CD, which features MacAdam-Somer on voice, violin, viola, and percussive dance. Out June 23 on A-Side Records. http://fiddlegarden.com/