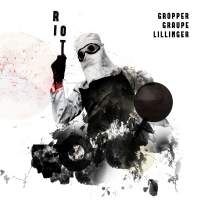 This is no ordinary music...this is not for mere contemplation of philosophical calm or zen utopia, for shaking your rump to a groove or swaying gently in melodic celebration...this is music for causing an uneasy tension, for setting displeasure at the start of every utterance. Well done fellas, dat's fresh.

They don’t go on stage, they step into the ring. That’s where they meet – face to face. Everyone for himself, everyone for the other, everyone highly concentrated and receptive for the quickly produced ideas, everyone as a source of inspiration for a musical clinch that – wide awake – lets the events arising in between breaks and attacks become existential. GROPPER/GRAUPE/LILLINGER is not only a band. GROPPER/GRAUPE/LILLINGER is a pumping, breathing, vital organism. An organism whose independent existence transmits itself to the audience in its now already 14th year of existence like an unexpected stroke of luck. The audience feels that this music has something to do with them. And there is no need for any didactic hints or programmatic expressions of a point of view. It happens immediately because these simultaneous, collaborative, at the same time free and disciplined sounds strike a chord and escape from clichés. The immanent prerequisite is the contextual examination of what is there: varieties of jazz, new music, electronic music, noise, progressive rock… Philipp Gropper (saxophone), Ronny Graupe (guitar) and Christian Lillinger (drums), however, don’t internalize the elements in order to reproduce them. They distil their own sound from them. All roots are examined to find out how they could have developed such an urgency once, in order to then be zoomed into a present where they relate to the spirit of the “now”. Very conscious of form, individual rather than a reproduction, feverish rather than linear, free, dynamic and conspirative. The three mirror the metropolises of the present trilogically, confront them and zigzag through their labyrinths. When they cast them into their order it becomes obvious that and how the story went on. This comes across so plausibly because the protagonists aggressively expose and defend their ego. Again and more and more their attitude is not defensive. That’s why “Riot”, that’s why uproar, tumult and revolt. This is how music of absolute relevance emerges, music that is more and more conscious of its in large parts written out means. Philipp Gropper, Ronny Graupe and Christian Lillinger have liberated themselves from historical bonds: Finally a (still) young band that doesn’t administrate the inheritance but follows its own vision. Everything but iconoclasts or hermetic avant-gardists, they are confidently and far from routine giving continuity to what they have achieved, making – after their last live albums – use of the features a studio offers in terms of post-production and sound manipulation, this time installing interludes as small islands of peace in the streams of consciousness of their urban explorations and thankfully keeping on and on with their hands-on joint arrivals and departures. The longer, the better …