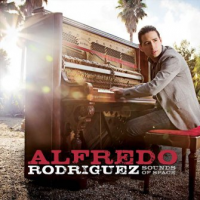 Sounds Of Space, the title of Cuban pianist and composer Alfredo Rodriguez' debut recording, evokes images of science fiction. In truth, its about a far more personal adventure. Its about the space that surrounds us, he explains. In this record I wanted to introduce myself: here are the people, the places and the sounds that have surrounded me, and made me who I am.