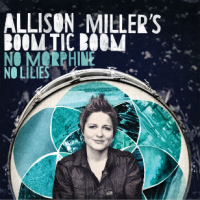 Editing this on International Women's day so it's nice to have some serious lady aces hitting together. "Pork Belly" is full of clever changes and 'get this' solos, and Todd Sickafoose's bass is as slick as a Ferrari's gearbox.

When Downbeat Magazine wrote that "Allison Miller's sponge-like love of all things musical could only mean she was destined to play it all," the venerable jazz publication had not yet even heard the drummer and composer's sophomore release with her Boom Tic Boom band, "No Morphine, No Lilies" (The Royal Potato Family, Release Date: April 16, 2013). But they were right on the money: this leading-edge quartet's new music -- featuring Myra Melford on piano, Jenny Scheinman on violin, Todd Sickafoose on bass Allison Miller on drums is at turns challenging and accessible, teasing and tough, virtuosic but never overbearing. It thrives on surprises and projects a vast array of tonal colors, rhythmic and harmonic shape-shifts and rich emotions. Featuring 11 compelling and far-reaching compositions, No Morphine, No Lilies -- co-produced by Miller and Sickafoose -- confirms that Allison Miller is not only, as the L.A. Times put it, "one of the most promising drummers in the game," but one of the most forward-thinking jazz artists of today. Recorded last year at Berkeley's Fantasy Studios, No Morphine, No Lilies -- which also features specials guests Steven Bernstein (trumpet), Ara Anderson (trumpet), Erik Friedlander (cello) singer Rachel Friedman (on the track "Once") -- delivers on the promise first suggested by Boom Tic Boom's 2010 self-titled debut. About that release the All Music Guide wrote: "Miller has hit on a winning combination...despite the fact that all of these musicians are leaders in their own right." Its precisely because each of the core players is experienced with taking charge that each contributes so significantly to the music's direction, at times taking command individually and at others contributing subtle shadings to the broader portrait being crafted by the group. And make no mistake, No Morphine, No Lilies is intended to be absorbed precisely that way: as one extended, interconnected work. Miller calls it "a journey, meant to be listened to from the beginning to the end. I believe in creating a group of songs that represent a body of work. Not individual tracks that have nothing to do with one another. The order of songs on a record is really important to me." The recording begins with the intense "Pork Belly," which is, says Miller, "kinda like letting a horse out of the gate. It really showcases that we are a real band. A lot of these songs are focused on composition, but a really important element of our ensemble is showcasing our prowess as improvisers, individually and collectively. I also wanted to have more of a fun party track to start it off, so the whole record isn't just a collection of more introspective tunes."

track of the day Pork Belly No Morphine, No Lilies The Royal Potato Family Allison Miller