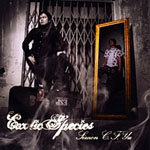 track of the day Pentatonicism Exotic Species Self Produced