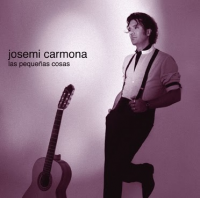 Josemi Carmona is performing as part of the V Festival de Jazz La Escalera de Jacob in Madrid, which begins tomorrow and runs until the 21 March. Album guests include Paco De Lucia, Dave Holland and Bugge Wesseltoft. This track brings to mind Marc Antoine with a twist, very enjoyable.

One of the key figures in contemporary music in Spain and, according to Paco Lucia, the best guitarist of his generation. Josemi Carmona explores the rich colorful palette of new possibilities for flamenco that bound with jazz, salsa and bossa nova. His first solo project “Las Pequeñas Cosas”, recorded by Universal Music Spain, was given a Latin Grammy 2011 as the best flamenco album.