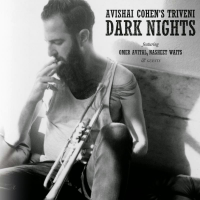 A free-minded tribute to Ornette Coleman, "The OC" by trumpeter Avishai Cohen's third album from his electrifying trio Triveni with bassist Omer Avital and drummer Nasheet Waits out on October 28, 2014. Cohen, is joined on the album not only by his powerhouse rhythm mates but also by three special guests: superstar clarinetist Anat Cohen (Avishai's sister and band mate in The 3 Cohens); Grammy-nominated pianist Gerald Clayton; and hit-making French-Israeli vocalist Keren Ann. The purview of Dark Nights is wide, from intimate lyricism to electrifying virtuosity, from jazz classics to progressive originals. The evergreen balladry of Billy Strayhorn's "Lush Life" and Charles Mingus's "Goodbye Pork Pie Hat" rubs shoulders with compositions from Avishai's pen that groove hard and burn slow, by turns.