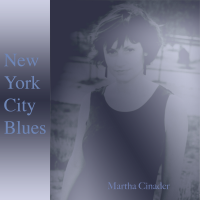 A rare combination of Suzanne Vega and David Byrne is the best way to describe Martha's style. Catchy and thoughtful.

New York City Blues was originally recorded around the year 2000. Sabine Worthmann did the arrangement and plays the Bass and toys. Heinrich Koebberling is playing percussion, and Ralph Kessler was the recording engineer in Hamburg, Germany. I had moved to California, and the Amadou Diallo incident was still fresh in my mind. I never did anything with this recording, and decided not to let it sit around any longer, so here it is! Martha Cinader Mims Sabine Worthmann Heinrich Koebberling