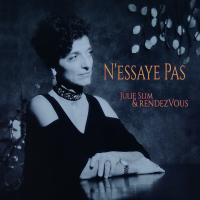 A gentle bluesy/zydeco whack to the chin to all stinking blokes.

This is a new original single, composed by Hugo King and Julie Slim and arranged by Julie Slim & RendezVous. The title means, "Don't You Dare!" and describes a woman standing up for herself in an unhealthy relationship with a man and telling him off. Recorded at Atlasta Studio in Austin, TX