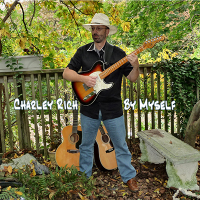 If the Adams Family listened to jazz, they'd love this. Quirky, meandering and some distance off your usual gait.

"Mythology" is a modern bebop tune featuring guitar, horns, keyboards, bass and drums. When I wrote this, I was listening to a lot of Thelonious Monk. I loved how he could produce a memorable melody using wide intervals, interesting chords and unusual phrasing. I tried to capture just a bit of that as I composed Mythology. Many years ago, I saw Thelonious Monk at the Village Vanguard. It was just as you might expect, a lot of smoke, a ridiculously small table and a waitress who returned every few minutes wanting to know if we wanted another drink. But, the music....was something else. Like all of the tunes on my CD, By Myself, I wrote the music and played all of the parts... though not at the same time. I especially had a lot of fun doing the sax parts and the call and response with the horn section.

track of the day Mythology By Myself cdbaby Charley Rich