My One and Only Love by Dor Herskovits 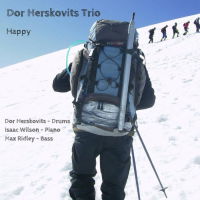 It's going to damage your health...you'll let it. Oneiric bittersweetness of the dead princess and afternoon faun variety. #onlyoneindeed #luckytobeus

This is the first EP by the Dor Herskovits trio. "My One and Only Love" is the only standard while the rest are original compositions by drummer Dor Herskovits. In this band, pianist Isaac Wilson (Los Angeles) and bassist Max Ridley (Boston) join Dor Herskovits (Israel) to form a powerful image of the state of Jazz music today. The three band members come from far sides of the globe. They met as students in Boston, where they quickly found a rare personal and musical connection and immediately started working as a group. Dor testifies: “After feeling the immense freedom and trust with which the trio played jazz standards, I decided to bring my own original pieces to be played. It was the first time that my tunes were played just as I had always imagined them”. Sonically, the trio descends from the great traditional and diverse jazz trios of the last century such as; Ahmad Jamal, Keith Jarrett, Brad Mehldau and The Bad Plus.

My One And Only Love; Happy; Speck Of Sky; Nyquil; Waltz.