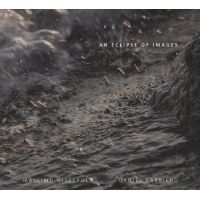 ALBUM LINER NOTES: The seven multilayered pieces presented here are hybrids meticulously built up of acoustic and electronic elements both composed and improvised. Synthesizing a complex relationship of lyricism and abstraction, acoustic double bass and drums define melodic and rhythmic figures against an ambient field constructed of electronic textures. The emergent sound is a weave of modally-inflected melodies floating over propulsive, intricate rhythms and harmonic blocks carved out of electronic matter. (Daniel Barbiero)