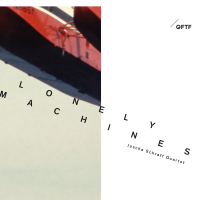 A red old Helicopter hovering over ground. It takes a lot of force and power to lift that much bulky machinery and it leaves much space for obvious analogies. And yes, Lonely Machines bares a blunt message - well thought out and wisely approached. It’s the line of argument where todays improvised music can go, leaving all clichés and expectations aside, enhancing the Freedom of music. Its the delighting touch of Joscha Schraff’s young music writing, the extraordinary sense of musicianship, and gutsy choices, that makes these songs sound fascinating and fresh. A modern music story. Joscha Schraff got together some of his best friends to form a band for his Bachelor Concert. A few weeks later the new Joscha Schraff Quartet became the Best bachelor Project 2013 of the university of the arts Zurich. Awarded with a groundbreaking tour in Switzerland’s most well known Jazz Clubs, receiving nation wide exposure and praise. 2015 the Swiss National Broadcast SRF 2 steps in, granting Joscha Schraff and his band a two day recording session in Europe’s well known Hardstudios. Preparing the release Joscha Schraff introduced «Lonely Machines» live, September this year at the Kammgarn, a venue that mostly hosts international Pop Stars, proving his point that Swiss Jazz is a force to reckon with.