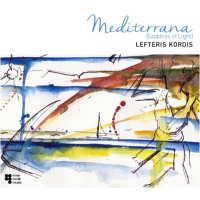 "Mediterrana" is the title track to Athens-born and Boston-based pianist Lefteris Kordis. "Mediterrana (Goddess of Light)", his fifth album as a leader, is an engaging, Tristano-esque exploration of traditional Mediterranean sounds. Kordis has been in the US, often in the orbit of Boston's esteemed New England Conservatory, for nearly two decades, accumulating jazz credentials with the likes of Steve Lacy, Greg Osby, and Sheila Jordan. For this record he's assembled a piano-trio-plus-guests, with drummer Ziv Ravitz and bassist Petros Klampanis at the core. Boston stalwart John Lockwood also performs on one track along with numerous other guests. www.leftchordmusic.com/