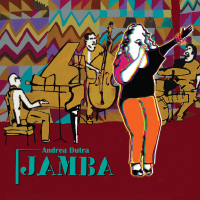 "A samba that arose during my sleep. I woke up and had to write it down. On that night, while I did my make-up for the show, the music came, and fit the words perfectly. A true download. The words talk about a person who reckons their own mistake, but can't help repeating it." In February 2013, Mills Records released Andrea Dutra’s new album, Jamba, an original mix of jazz, samba and Brazilian jazz, that ends up sounding what we chose to call Brazilian universal music. The album shows how Brazilian music can use elements of jazz, like improvisation and reharmonization, to enhance it’s beauty without ever losing its Brazilian accent and characteristics. In fact, it’s clear to see how jazz and Brazilian music have exchanged, influencing and being influenced by each other. The tracks are a mix of unreleased songs, by Ms Dutra and other composers, and new versions of tunes by Djavan, Moacir Santos, Monarco, Vinicius de Moraes, Caetano Veloso, Fatima Guedes and other great Brazilian composers. The tracks were recorded live in studio by Andrea Dutra (voice) Paulo Malaguti Pauleira (piano), Zé Luiz Maia (bass), Augusto Mattoso (double bass), Rafael Barata (drums) and Marcelo Martins as a special guest artist, playing sax and flutes. The CD was produced, mixed and mastered by Carlos Mills.