Lullaby of Birdland by Swing Noir 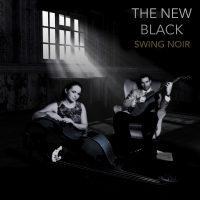 Vintage treatment of a classic.

Swing Noir are made up of Serena Sykes and Jim Knowler. They formed in November 2014, having travelled to Holland in August, they stayed with a friend, where an old bass stood in the corner, Serena found her love of the instrument and by October she had saved up enough for one of her own. With their combined love of music, and many hours to fill together, they practiced hard and performed their first set in December 2014, at the Kings Theatre in Ramsgate. They have gone from strength to strength, bringing their own sound to some wonderful classic songs, with Jim’s gypsy jazz influences and Serena’s love of the old Swing favourites, they bring you the sound of Swing Noir.