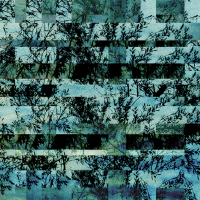 Back in Buenos Aires. It was a hot January afternoon and it was raining heavily. Sitting at the piano, I picked up a random book and opened it to a random page. I read: “Lo abismal, el agua", and started improvising melodies using the text as lyrics. The book was the "I-Ching, the book of mutations", and those words came to me at the right time: "Water reaches its goal by flowing without interruption". All my efforts to restart my life in Barcelona had been forced. All that was left was to wait, all that was left was to be like water. In the end, the song ended up being instrumental with moments of lyrics, but I think it preserves, in the melody and arrangement, the images of the text. In a few months, fate brought me to Basel. Again, another city, another experience. The song began to take on multiple meanings and today it is the song that echoes in me the most and guides me in difficult moments. These songs were written at the crossroads, at a point of no return, in a tide of change, in the search for the unexpected, between uncertainty and euphoria, in a process that led me to emigrate from Argentina to Switzerland (even without knowing it) and from which I continue to learn. Each song is, in a way, an episode of this story and a call to be like water so that, with resilience and a lot of love, we know how to confront ourselves with the abysmal of these times.