Live at U of T by Liebman & Murley Quartet 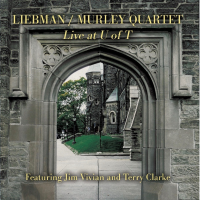 Album Title: Live at U of T
Label: Self Produced
Released: 2017

Saxophonists Dave Liebman and Mike Murley have performed together for more than a decade, previously releasing Day and Night on Cornerstone Records. Their second release, Live at U of T, featuring bassist Jim Vivian and drummer Terry Clarke, came about as a result of Liebman's appointment as Visiting Adjunct Professor at the University of Toronto, Faculty of Music. Recorded in a small concert space packed with attentive listeners, Live at U of T captures the spirit and spontaneity of live jazz in an intimate setting. The natural rapport between the musicians on this recording is immediately apparent. Murley studied with Liebman in the 1980s at the Banff Jazz Workshop and in New York City. He and Vivian have worked frequently with Liebman over the years, primarily in the Toronto area but also at recording sessions and concerts in Halifax and Montreal. Drummer Terry Clarke and Liebman are both veterans of the international jazz scene dating back to the late 1960s and their musical chemistry was instantaneous. Live at U of T will be released worldwide on Friday, December 15th, 2017.

Split or Whole; YBSN; Off a Bird; Small One; Open Spaces; Nebula; And the Angels Sing; Missing Persons; Blackwell's Message;