Lifeline by Dig A Little Deeper 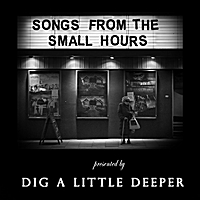 Clear delivery from an effortless voice and band. Nice debut and a great sound out of Ireland.

'Songs From The Small Hours' is the debut album from Dig A Little Deeper. The album combines eleven orignal songs from band leader, Mick Stuart (guitar), with some of the brightest talent emerging from Ireland's jazz community. At the heart of the band is a desire to craft songs, across any genre; jazz, pop, blues, that connect to the listener. The songs have been approached with openness and versatility from band members Ríona Hartman: vocals; Mick Stuart: guitar; Johnny Taylor: piano; Dan Callaghan: double bass; Tommy Gray: drums.

I Cannot Help Myself; Lifeline; Dead and Gone; Your Wish is my Command; Cold; Last Chance Saloon; You Push I Pull; In my Corner; When I Go; Lost; Boy Oh Boy.

About Dig A Little Deeper