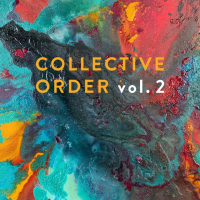 Volume Two is the first all-original album by Collective Order. The band initially formed in 2016 to make Volume One, a self-produced recording of jazz standards. Upon releasing the album they realized the potential the project had to be a diving board for collaboration and creativity. For many of the band members, Volume Two was their first opportunity to compose/arrange music for a full-length studio album. Drawing from a roster of nineteen musicians, each track features diverse instrumentation within ensembles that span from a quartet to a thirteen-piece. Volume Two provides the listener with an eclectic musical experience, offering a vast and varied stylistic range. After receiving generous grant funding from the Ontario Arts Council and the Toronto Arts Council, the band was able to extend their time in the studio to two full days, a significant increase from the 6 hours they had to record Volume One. This allowed for the musicians to further refine their compositions during the recording sessions. Volume Two will be released worldwide on Friday, September 29, 2017.

track of the day Laniakea Volume 2 Self Produced Collective Order