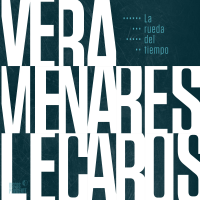 Mobius is out, the wheel is in. A dip in the ocean of stringed introspection...

La rueda del tiempo (The Wheel of Time) The trio of guitarist Nicolas Vera, bassist Pablo Menares, and drummer Felix Lecaros have been playing together in various capacities for over 15 years, starting when they were teenagers crashing jam sessions at the Club de Jazz de Santiago. Since then, they have rounded out the rhythm section in countless projects, both in their native Santiago and abroad---even after Menares and Lecaros made the move to New York City in 2009 y 2012. Rueda del tiempo, however, is their first album as a trio. They had harbored the intention to record together for many years, and when Vera visited New York in May 2016, they took advantage of the opportunity to record at Acoustic Recording in Brooklyn. The result is a mix of jazz standards that they have been playing together for years by jazz greats such as Thelonious Monk and J.J. Johnson, as well as original pieces by Vera. The result is a rare document of transcontinental brotherhood, three jazz compatriots who have grown up listening, playing, and studying together on their various journeys across both American continents. Recorded on may 4th 2016 by Michael Brorby at Acoustic Recording, Brooklyn, New York. Mixed and mastered by Katsuhiko Naito at Avatar Studios, New York City. Photography: Gonzalo Cisterna Sandoval Design: Cristián González S. Produced by Nicolás Vera, Pablo Menares y Félix Lecaros Distributed by Discos Pendiente © 2016 Discos Pendiente www.discospendiente.com www.nicoveranicovera.com