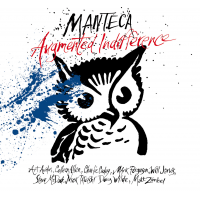 Dude! A most excellent adventure - a fulsome, punchy spritzer that doesn't get on your wick. Dashing stuff.

In 2020, the Juno Award-winning jazz world collective Manteca celebrates its forty-first year with the release of their 13th recording Augmented Indifference. Drawing on musical influences throughout the Americas, this nine member artists collective has been an international musical innovator, creating original music influenced by world, jazz, and orchestral music. In its forty-one year history, the group has been one of Canada’s leading musical ambassadors, touring the world’s most prestigious festivals - from the Hollywood Bowl to the North Sea Jazz Festival - and sharing the stage with the likes of Miles, Ella, Weather Report and Van Morrison in an explosive high energy show full of joy and exhilarating musicianship. Augmented Indifference is an exciting addition to Manteca’s catalogue, full of fresh, powerful melodies, from the Weather Report - and, more generally - weather inspired Miss Météo, to the Beach Boys tribute Kowabunga. The tracks are under-pinned by skin on skin hand percussion grooves and grounded by an elite rhythm section of drum kit, acoustic piano, bass, and guitar. Augmented Indifference was released worldwide on Friday, January 24th, 2020.

track of the day Kowabunga Augmented Indifference Self Produced Manteca