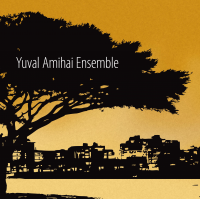 "Kadimuchka" - a great word invented by my childhood piano teacher, Raymonda Sheinfeld, to encourage me to go ahead and play as much as possible. Being a Russian speaking immigrant to Israel, where I was born and raised, My teacher added the affectionate suffix "chka" to the Hebrew word "Kadima" which means "go ahead". The tune is from my first album with my Paris based quintet, Yuval Amihai Ensemble. Hope you like it !

With an unusual formation, two saxophones, guitar, bass and drums, Yuval seeks to create a new means of expression closer to his musical aspirations. It borrows from Israeli folk songs based on its arrangements to make amazing new standards. His compositions are inspired by the variety of cultures he encounters during his youth.