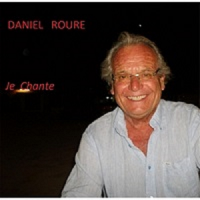 A little gallic charm to sweeten your day.

Je Chante Lyrics Jacques Roure ,Iza Loris Music: Daniel Roure In 2015, jazz singer and pianist Daniel Roure released the single, “Je Chante,” the latest in a long line of singles and albums to deliver jazz texture in the French language. Roure is joined by Christophe and Philippe Le Van on bass and drums respectively, forming a jazz trio that accomplishes a large amount in a song that’s a little over two and a half minutes. “Je Chante” is driven by a constantly chugging, but not overly complex piano melody. The brisk pace is accompanied by a lyric that’s just as briskly delivered in Roure’s husky, but beautifully smooth voice. Christophe’s bass is simply there for rhythmic purposes, not entering the spotlight at all, and the same can be said for Philippe’s drumming. He opts for brushes instead of sticks, giving the percussion a soft, shuffling sound that doesn’t detract from the vocal. In fact, all of the instrumentation here basically serves to be soft enough to let the lyric flow, but also maintain enough of a presence to keep the song lively and energetic. “Je Chante” accomplishes this staggeringly well. Every part is significant and memorable without being overstated. It’s the epitome of less is more with the only true “solo” of sorts being Roure’s scat singing towards the song’s end. Regardless of whether you’re a fan of French language jazz or not, “Je Chante” is deserving of your attention. It’s actually more deserving of it if you’re not a fan of the genre because of how wonderful an introduction it can serve to this style of music. By mixing simplicity with depth and smooth vocals with a sweet lyric, Daniel Roure has constructed an absolutely charming single that any music listener can appreciate. Artist: Daniel Roure Single: “Je Chante” Review by: Heath Andrews

track of the day Je Chante Self Produced Daniel Roure