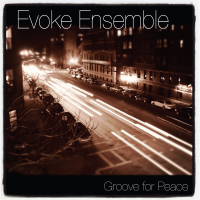 Not the blues, but evokes a Bluey for sure. In the not so old days this would be classed as acid jazz/jazz funk.

The Evoke-Ensemble performs the music of bassist/composer Tim Paul Weiner. An eclectic, bass driven, musical hybrid steeped in groove and improvisation, inspired by jazz, influenced by film, with flavors running the full musical spectrum from world music, to classical and beyond.