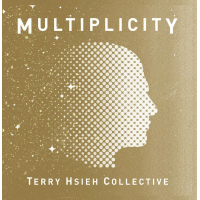 Starts out hopeful. Zenon is a welcome conduit, quietly dominating piano and bass continue, a quick 1 2 jab brings in a beautiful trombone interlude from Eubanks -- somewhat submerging in drums returns to Zenon to lead a passage of dizzy doubting. Life hey! Always something.

Intrinsic Doubt is a feature track off the Terry Hsieh Collective's new album "Multiplicity". Written and composed by Terry Hsieh, the piece features Miguel Zenon on alto saxophone and Robin Eubanks on trombone, as well as Peter Manheim on drums, Patrick Adams on trumpet, Jacob Baron on keys and synthesizer, and Matt Adomeit on bass.