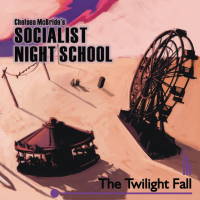 High on technique, texture and fibre, low on sugar. The sax solo is a highlight.

Based in Toronto, The Socialist Night School -- under the leadership of fast-rising 24-year old award-winning composer, orchestrator and multi-instrumentalist Chelsea McBride -- is a 19-piece modern big band whose melody driven, lyrical compositions often hide the complex writing style at work.  This is high-minded jazz orchestra writing, in the spirit of Bob Brookmeyer, Maria Schneider and Darcy James Argue -- but with a contemporary, modern twist. The Twilight Fall is the group's first full-length recording and is a very specific vehicle for Chelsea's story-telling, with each tune having it's own narrative direction accompanying it, and outlining a life-cycle that starts you at birth, and then -- one tune at a time -- moves you forward through a life-time of experiences.   Each tune is to be treated as a soundtrack to this life-cycle and I highly encourage those receiving this to read the accompanying "Compositional Narrative" in order to appropriately frame each tune.  This is a very well thought out recording, both from an orchestration standpoint, and as a unique Chronicle of 10 tunes, where each tune is one small element of a larger whole. Legendary trumpet player Randy Brecker (long-time mentor to Socialist Night School trumpet soloist and label exec Brownman Ali) had this to say about the recording:  "... this is a record that deserves a full, focused top-to-bottom listen to truly hear the depth of Twilight Fall’s engaging story” Chelsea McBride's Socialist Night School is a unique cross-generational collection of some of Toronto finest musicians, where award-winning veterans like William Carn, Colleen Allen & Brownman Ali find themselves standing next to some of Toronto's hottest jazz 20-somethings, handpicked by Mcbride for this project.  Chelsea has long envisioned a big band without borders, without prejudice and without limitations, able to execute her challenging material as a singular organism -- this project is the culmination of that vision. Her complex original compositions (often changing meter from bar to bar) has been called "picturesque", "cinematic" & "joyful" by Canadian media, but what's more striking on this recording, is the long-form narrative at work.  For example, for the album's title track -- The Twilight Fall -- during live performances Chelsea asks this of her audience : "Close your eyes and picture your six-year old self in onesie pajamas falling through a purple sky with orange clouds.  Until you land in a carnival -- broken, tilted Ferris wheel on one side, dusty abandoned carousel, chipped paint, fading, on the other.    You see the gates open, and the buttons for the carousel are exposed in front of you, so you approach, teddy bear in one hand, the other outstretched to turn on the machine – when grey, translucent spirits, begin to swirl around your head.  This is the Twilight Fall". The Socialist Night School's The Twilight Fall was produced by Kevin Stolz (a gifted young Toronto producer who has overseen many of Chelsea's projects) and is set for release in 2017 on Brooklyn/Toronto based trumpet player Brownman Ali's label Browntasauras Records.   The label is now widely regarded as a vanguard for new and visionary talent in the evolution of Jazz in Canada.

The Wonder of Being Here