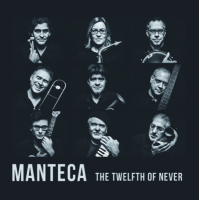 Album Title: The Twelfth of Never
Label: Self Produced
Released: 2020

Forty-one years after their first downbeat, Manteca - the Toronto based world-jazz nonet - is very much upbeat, still creating, still exploring, and still a force of joyous sonic invention. If you think you know their music, this CD will come as a big surprise. The Twelfth of Never is the Juno Award winning jazz world collective’s 12th CD. A collection of eight original compositions by Doug Wilde, Matt Zimbel and Jason Logue, it was recorded at Revolution Recording in Toronto over four days with four time Juno Award winning engineer Jeff Wolpert. With longevity comes a certain aural refusal to conform, a kind of “I yam what I yam”, creative defiance. The Toronto Star called Manteca’s last recording “gut grabbing innovation.” Oh yeah, we’ll take that! After attending a pre-release listening session, Laurie Brown (host of Pondercast and CBC Radio’s “The Signal“ ) said: “there’s a seismic emotional shift in the music. The Twelfth of Never is cinematic, introspective, atmospheric and moody – mysterious even. The playing is exceptional and the sound is remarkable.” The Twelfth of Never is by turns tender and cutting - a tour de force by one of Canada’s most storied bands. The Twelfth of Never was released worldwide on Friday, October 16th, 2020.