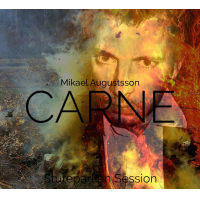 A murky, mesozoic scene-setter, a tango stomp for deviant dinosaurs...ouch.